These are the best of the bunch 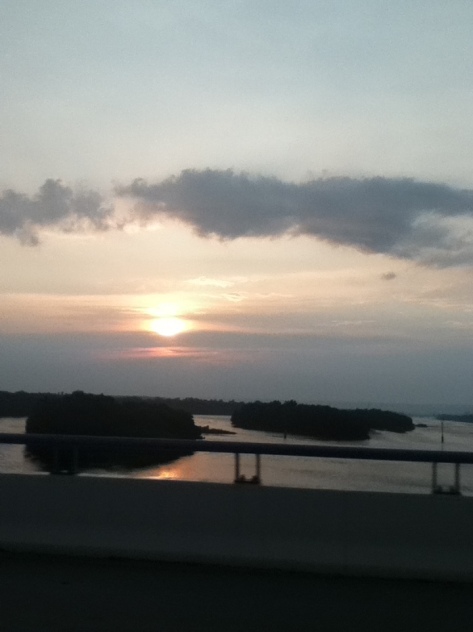 This is the setting sun over the Susquahana River

Hello, I’m sorry I haven’t posted for a while (even though I’m fairly positive no one reads these) but I went on a long vacation to Virginia, and I hardly ever had a chance, let alone wifi, to post on here.  Anyway, the trip was great.  On the way there I saw some beautiful scenery.  I only took one post-worthy picture on the way there but there are plenty I took later on.  I will post them in a minute.  So, during the vacation I went to the Luray Caverns, which was really interesting.  Fun fact- Stalagtites and Stalagmites take 120 years to grow one inch!  So imagine how long the 20 foot structures took to grow! Anyway, after the caverns, we went to the Appalachian trail in a place called Skyline drive.  At least I think that’s what it was called but I may be wrong.  I know the word “sky” was in there somewhere.  So this place was beautiful.  We drove for probably an hour up just one mountain.  I took a lot of pictures there that I can post later.  On the way home there was some CRAZY heat lightning that lit up the sky.  In other news, after I got back, my friend gave me a $500 compound bow along with several arrows with tips, and he tuned up the draw string, zero’d in the peep sights, and gave me a drawback glove.  So altogether this probably cost around $600 dollars.  He did this just out of kindness.  I mean, he didn’t just go out and buy it, this was his bow from a while ago.  But still, a very nice gesture.  Another interest of mine is hunting.  Not just hunting, but that whole lifestyle.  Living off the land, hunting, building stuff is all something I’d like to do, however I didn’t think it was important enough to put in the “about me” post.  I’ve never actually been hunting, but I would go.  The only reason I haven’t is because my mom thinks it’s wrong to kill animals.  I wouldn’t say she’s an animal rights activist, but she doesn’t think I should hunt either way.  So that’s it.  Bye!

Hey, I just remembered that I left something out of the “About me” post.  Another interest of mine is cars.  I love cars.  I know a good amount about them, and I enjoy talking with people about them.  My favorite car is a 1971 Dodge Challenger.  That’s my favorite type of car: classic American muscle cars.  This may be involved in my blog.

My cousin is also a big fan of airsoft like me.  Me and him are going to go to an airsoft tournament sometime at the end of this summer.  Maybe a little while after the summer because it needs to be a little cooler.  Anyway the tournament will be at an outdoor field in New Jersey.  I’m looking forward to it.  I have everything I need to go, except for an airsoft gun.  I do have a few, but I need one specifically for this event.  If you’re interested, here’s the link to the one I’m getting.

This is a Socom M14 short barrel version, with a tactical rail for scopes, and other attachments.  I was going to get the full sized one but it was like five and a half feet long, and weighed a lot, so I think this one will be a better choice.  I chose the M14 for a couple reasons.  Its one of my favorite rifles, it’s very accurate, and it works well for what I’m going to be doing with it.  Later I’ll be posting about my outfit and gear for the occasion.

Well, I’m John.  I’m 14.  A little young I know, but I think I have some pretty good content in store for this.  Anyway, some of my interests are: cooking, airsoft, archaeology, and sailing.  Kind of a weird mix.  Well I’ve always loved cooking.  I started when I was really young (probably around 6) and I’m still doing it now.  Also, I’m not talking about mac n’ cheese here.  For example, my favorite thing to make is grilled tilapia with lemon, and bruschetta as an appetizer or side dish.  Things regarding cooking such as recipes, and cooking tips will play a pretty good role in my blog.

Ok, so, next topic.  Airsoft.  Many people probably don’t know what this is.  Well, airsoft guns, are basically replica guns, that shoot 6mm. plastic bb’s.  Using airsoft guns or “airsofting” has been a hobby of mine since I was big enough to hold one.  Those who play airsoft will probably call it a sport.  This is because there are many big, public, tournaments you can go to to play.  Most of the time, it’s team against team, but there are other types of games too.  I have a pretty good collection of these airsoft guns and gear, and this will probably be a pretty big asset in my blog.

Moving on, we come to historical archaeology.  This is what I want to do as a career.  I love most aspects of archaeology, weather it’s digging up an ancient artifact or analyzing what a team of archaeologists have found.  Small things that have to do with this will be in this blog.

Last but not at all least, one of my biggest interests, is sailing.  What I mean by this is rather complicated.  I love boats.  Specifically smaller, more agile boats, rather than huge, 50 man ships.  A dream of mine is to sail around the world.  Maybe not literally, but you get the point.  If you’re anything like this, you may infer that my favorite singer is Billy Joel.  If you don’t understand this, it’s because Billy Joel is connected to sailing in many ways.  Many of his songs have nautical references, and his personal management company is “Maritime Music”  So yeah, My favorite song is “The Downeaster Alexa” by Billy Joel.  The “Downeaster Alexa” is a boat that Billy Joel owns (or used to own) that he named ‘Alexa’ after his daughter.  The “Downeaster” part is a fictitious word meaning a strong, sea worthy boat, generally made is Southeast Maine.  Hence “Downeaster”.  Well, there you go.  That’s me.  Anything else that I did not mention that appears in the blog will probably be just an interesting thing that I heard about, or something that’s going on in my life.  This will also be a big part of my blog.  For lack of a better closing sentence, Goodnight.

Hi, I’m John.  I created this blog mostly because I had nothing better to do and this seemed like something interesting.  Well I intend to keep posting amusing content about cool things in my life, and other things that might spark your attentiveness.